Botswana Fibre Networks (BOFINET) has partnered with the Ministry of Youth Empowerment, Sport and Culture Development (MYSC) in availing WIFI Hotspots that will connect Batswana to watch NOW TV free of charge while on-the-go. 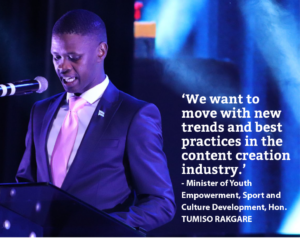 This telecommunications platform is meant to collaboratively utilise innovation at BOFINET and will be launched next week. During a media briefing this week, BOFINET technical executive, Mpho Koolese, said since Now TV channel was launched last year, its viewership has been limited to set top boxes.

He said now BOFINET is ready to take it to people for them to watch it online using their smart devices.  “During numerous encounters with MYSC we considered playing the IT space, we presented a couple of ICT related initiatives that could resolve the challenges faced, which were fixed by the television set,” he said.

Koolese added that they have an IP TV platform inhouse at BOFINET that will be used to channel this to the people.  He said BOFINET

has developed a portal that will be used to connect audiences to view the channel.

“Currently, we have WIFI hotspots in areas like Gaborone Mahalapye, Palapye, Francistown, Serowe, Maun and Kasane. The hotspots are installed in airports, shopping malls, bus ranks, and hospitals and provide services to around 200,000 users,” he said.

With these hotspots, Koolese said, BOFINET would be able to provide connectivity to Now TV free of charge.  He said they are in the process of expanding these hotspots to areas like Molepolole, Moshupa, Thamaga, Gantsi, Tsabong, Jwaneng, Lobatse, Kanye, Mochudi, and Selebi Phikwe.

“The youth, who are residents in those areas, will be able to access this platform and they will no longer be limited to watching it at home,” he said